Where do you live?

I live in Wandin North, which is in the Yarra Valley, Victoria. It’s a handy place to live and be an eventer, with many cross country courses and events nearby

Tell us about your horse?

The horse that most people know about is my pony Lakevale Toyman or Tommy. He’s a 14yo, 13.2hh Australian Pony that i’ve owned for almost 8 years now. I initially purchased him to be a companion for the thoroughbred that i had at the time, with the added bonus that he was broken in!

I always had a lot of fun on him but in the early days I had no idea how talented he would be! Now he is eventing at 1* level, the smallest horse to do so in Australia at least! He has gone double clear and had placings at this level too, with his strongest phase being cross country (he is a XC machine!).

I also have Tetley, a little 15.1hh thoroughbred who is now 21 but refuses to retire! He still happily competes at grade 1 and EA105 level, with wins and placings at most of his events in the last year! I’ve had Tetley for just over 6 years now and he was my first 1* horse and took me around my first Melbourne three day event.

My other pony is Tommy’s 5yo full brother Danny. I’ve owned his since he was a 2yo and he’s turning into the coolest little pony, although a lot more chilled out than his older brother!

Describe a typical day for you:

I’m a uni student and I also work as much as I can to fund my horses so there is no typical day really but most days I’m at uni or working most of the day so ride either early in the morning or at night.

I also run both for fitness and in the occasional race so I try fit in a run as many days as I can!

What equestrian dreams are you chasing?

I would love to eventually ride at 2* and 3* level, although that will mean trying to find a new horse at some stage.

With Tommy, especially at the level he is at, my main focus is us both having a ball and loving what we do because he’s pretty unique and I always want him to do what he does because he loves it, not because he has to.

With Tetley at his age I just appreciate how amazing he is for his age and enjoy every comp i get to do with him!

What problems does your Sweet Iron gear solve?

The gloves in particular are my favourite! When i’m riding quite a lot i find other types of gloves wear out very quickly (especially on a very strong Tommy on cross country) but the Sweet Iron gloves seem to be much tougher, while at the same time being comfortable and grippy!

The shirts are great in that they can be used for casual riding and training, but really stand out and look great when worn at a competition, especially on cross country

Where can we stalk you?

So little Tommy has his own Facebook page; Lakevale Toyman- Eventing pony. I can also be found on Instagram @jackiwright

Check out our other Sponsored Riders here. 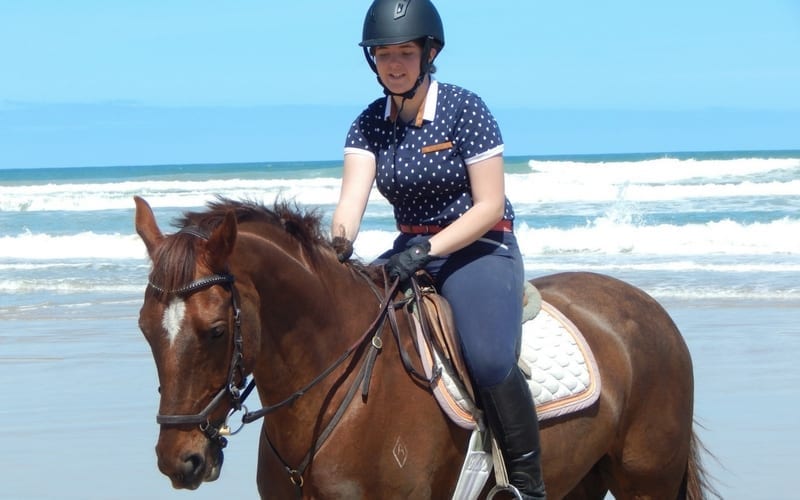 We give riders an alternative to traditional equestrian clothing with funky designs that make you look good and feel great. All served up with delightfully fast shipping!